What's happening with my phone? Is Microsoft did some changes in software or something else?

Lumia phones (at least high-end ones like the 920) have a sensor that supports multiple aspect ratios. The full resolution of the sensor on the Lumia 920 is 3552x2448, which works out to just about 8.7 megapixels, but that full resolution is never used.

The following image from the Lumia 920 imaging whitepaper illustrates this well: 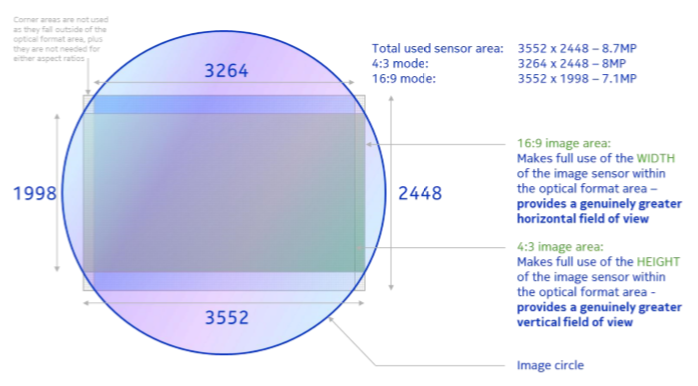 This sort of sensor design dates back at least as far as the 2011 Nokia N9. The reason for it is to minimise the loss of resolution when switching between aspect ratios. With the 920, when you switch from 4:3 to 16:9, you lose about 11% resolution. Compare this to traditional 4:3 sensors where 16:9 is achieved by simply cropping the image, resulting in a 25% loss of resolution

To address the practical aspect of the question - to change the resolution back to what it was, simply change the aspect ratio. Both the Camera and Lumia Camera apps let you choose between 4:3 and 16:9. There is no other way to set the image resolution on the Lumia 920 (unlike the higher-end models with oversampling, like 1020 and 930).

Not the answer you're looking for? Browse other questions tagged lumia nokia-lumia-920 camera or ask your own question.

0
Lumia 920 Release Date
2
What is the native resolution for the photos app wallpaper on a Lumia 920?
7
Change Photo Resolution
3
Lumia 1020 Camera Cover Crack?
6
Can I disable the camera button on my 920?
0
Crash & Overheating with Nokia Lumia 920
3
Lumia Camera Tap to Take Photo
2
Camera automatically comes on
2
Nokia Lumia 830 camera problem