I am experiencing an odd problem with wirelessly charging my phone. When placed on the charger, with about 40% battery. The phone 'binged' to let me know it was charging. ~8hrs later, the phone was dead. I know the phone has a great standby time. So even if the phone wasn't charging, I would expect that with no interaction, that it could last 8hrs at 40% battery. Any thoughts as to what may be draining the phone dead? Interestingly I toggle the phone a bit on the charging 'pill' (rotate 20deg and then back) and it begins charging and almost immediately starts the boot up process ... unlike when you really use up all the battery in a phone and it charges for 15 or so min. before booting up. 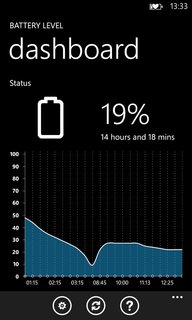 I have had a similar problem once in a while. My theory is that it starts doing a lot of work while it's charging and it gets hot enough that it stops charging and never restarts. Sometimes it's too hot to touch. I remove it from the charger, cool it off, put it back and everything works fine.

I have experienced this on my phone, and here are a few tips/my thoughts.

First, why would it drain the battery so fast? This is just conjecture but when the phone is charging apps are allowed to run huge background tasks. Think wireless sync of your music to your computer. A few of those will kill the battery. Ahh, but you are charging, it shouldn't be using more power than the charger can provide...in theory!

I have also noticed that the wireless charging station doesn't deliver power as fast as the wired one, so it could be possible you are using more power than what can be provided. I doubt it, but it could happen. What I think is going on is what happens with me though.

So in short: make sure you get the phone on the stand in the right position. Also check your apps and see if any of them could be doing large background tasks when plugged in. I don't think you can see a list on the phone, but apps that sync with something on the internet usually are the culprit (skydrive, wireless sync, drop box, etc...)

Not the answer you're looking for? Browse other questions tagged 8.0 lumia battery nokia-lumia-920 or ask your own question.