Is something like adoptable storage support on the Windows?

I don't own a Windows Phone but I'm thinking about buying one.

Do Windows Phone's have support for adoptable storage if I buy a phone with only 8GB of storage? Adoptable storage allows you to use the microsd as if its internal memory.

We'll if you're thinking of buying a windows phone I would recommend you a phone that is supported for Creators update as adoptable storage is available on Windows 10 Mobile creators' update but not on the previous versions of OS. The equivalent windows term for adoptable storage is SD card encryption. You can find that under Settings > update and security > Device encryption. 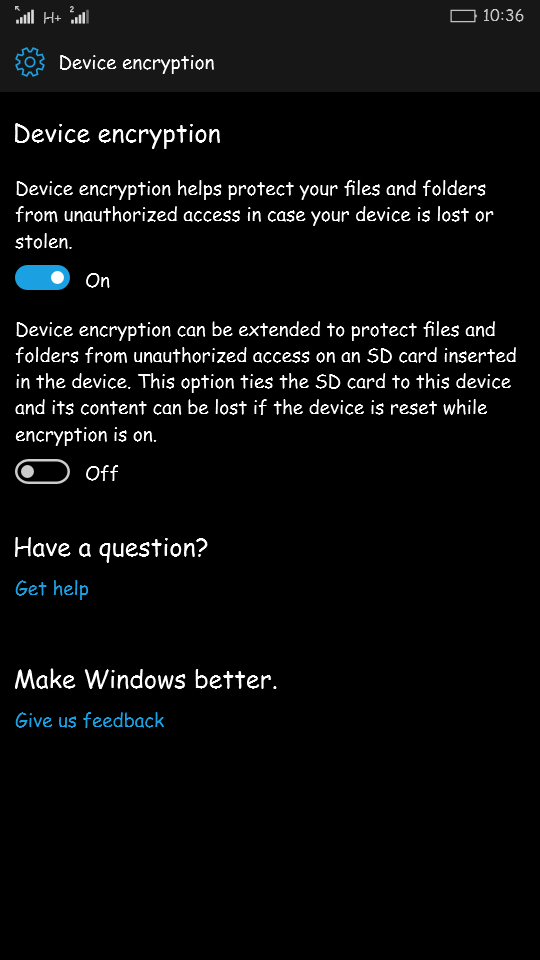 Yes, Windows Phone supports expandable storage using microSD, but this is going to vary based on the specific model. My 950 XL for example supports microSD, but my 1020 did not.

Modern Windows phones don't permit using the SD card as actually part of the internal storage (WP7.x phones did this, but didn't support using SD in any other way). However, you can tell the OS to put many of the biggest types of things - downloads, photos, music, videos, apps, and downloaded map data - on the SD card. Doing that, the only things that will be using the internal storage are the OS itself, user settings (which are pretty tiny), the handful of apps which don't allow installation to SD card (you can see if an app has this restriction when installing it, too), documents (for some reason), and stuff like SMS and email. Email is often the biggest one of those (on old Windows Phones it was just listed as "Other" under storage used and people kept wondering what those gigabytes of "other" were), but you can tell the phone not to keep any email older than a brief period synched to the device, so that the storage needed for it won't get too big.

Apps installed to SD card are automatically encrypted using a device-specific key. If you remove the SD card then no other device - not even another phone signed into the same account - will be able to access the app data. Other kinds of data (images, music, downloads, etc.) will not be encrypted by the OS.

Not the answer you're looking for? Browse other questions tagged storage micro-sd or ask your own question.

7
Does Windows Phone 8 support mass storage mode?
0
Is storage capacity of Windows Phones advertised as an overall total, or available space?
9
How to save offline maps to SD card?
4
SD card not detected through Storage Sense
4
Micro SD Memory Card Removed Without Properly Ejecting - Now Apps Don't Load
5
How to move to Windows 10 when using apps on SD card?
3
Whats the biggest MicroSD card I can insert in Lumia 535
3
How to increase storage in Lumia 520?
0
What features will I miss if I move apps to SD card?