How do I update an app?

I'd assumed for ages that I got updates to all my current apps by clicking on "1 update", "2 updates" at the foot of the Marketplace homepage as and when I chose to visit Marketplace. Not sure why, but I had assumed that this was a standard mandated by the OS. 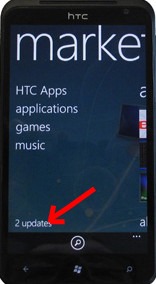 But the updated Twitter app wasn't showing as an update on my Marketplace homepage. And I was still stuck on an old version. Strange. So I wondered whether I should try reinstalling it, searched and clicked through to Twitter within the marketplace and instead of the [Install] button there was an [Update] button. I chose update and hey presto have the new version.

So my question is, is the "2 updates" etc on the Marketplace unreliable? Do only some apps update that way? Is it normal for other apps (like Twitter) to require you to go the long way around? Maybe some auto update? Maybe other apps do something else?

Or maybe Twitter was going to show up eventually as a marketplace homepage update, I was just too impatient. Is that possible?

How in general do I update an app?

Windows checks for updates at scheduled times. If a new update is out but your phone hasn't received the notification yet then when viewing in the Marketplace you will see the Update option

It can take up to 48h until an app update is availiable to all phones in all markets. You can however search for the app in the store for which you're expecting an update. Sometimes the update can be triggered from there a bit earlier.

Not the answer you're looking for? Browse other questions tagged apps store update or ask your own question.

5
How to see twitter trends from the twitter app once an account has been used to login?
3
How to Restart a Stuck App Update?
2
Is it possible to opt-out of carrier restrictions on OS updates?
3
Some system Apps lost after hard reset
3
Are there any non-carrier/non-branded Windows Phones?
1
Problems with update Windows 10 on Lumia
5
Microsoft Lumia 640 - Missing keyboard and error code 0x80073712
3
Can't update anything on Store
2
Cannot download certain apps after Windows 10 upgrade
0
Installed apps are shown as Pending and are not accessible