Home screen bumped down by nothing

On my Nokia Lumia 1020, I've noticed the following:

The topmost tiles of the home screen always default to a position a little bit down from the top of the screen. It appears to be the height of a toast notification, not just the height of the clock, etc. This is frustrating because the tiles are designed to fit on the full screen and when they default to this position there is a big unnecessary black bar at the top and the bottom row of tiles gets cut off, rather than being fully visible as intended. Looking around, it seems that people with other Windows phones are having the same experience: 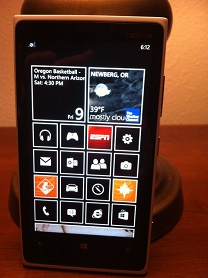 Has anyone else noticed this? Is there a fix or workaround?

Has anyone else noticed this?

You bet. There are very active discussions about this taking place on:

In the case of the latter, you can add your vote(s) to the issue.

Is there a fix or workaround?

No workaround at this time. Windows Phone 8 is constantly being updated though so having an option to adjust that empty space is always a (in my opinion, unlikely) possibility.

Edit: More research on whether this can be done by building an app

Turns out I am not the only one who has been thinking along these lines...

What it boils down to is that there are no API's that might allow developers to do such a thing (yet) and any other way of hacking this will probably not be approved for the Marketplace anyway!

7
Can I change the color of individual static tiles?