What does Office Lens give you over and above just photographing the item?

So with my new phone I see that I have Office Lens which appears to be designed for copying or scanning documents, and capturing whiteboards.

I've tried it out on a handwritten document. I was hoping it'd show up in OneDrive so I could access the scan and use it on my desktop/our network. And sure enough, it did, automatically. Which was nice.

However I see that it doesn't look much different from a photo. 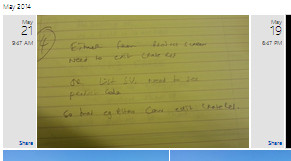 So what does it do that I'm missing?

Edit
Since writing this I notice that there are two images/documents in the camera roll, the yellow one and what looks a lot like an "improved" one, whiter with no shadowing. That could be the result of Office Lens doing its thing I suppose. But the "better" one isn't in OneDrive.

Here's what's on the camera roll:

Office Lens applies additional corrections to the photos it takes. Mainly it tries to recognise the subject (e.g. a document) and crop the image to it. This means you'll end up with a neatly trimmed and aligned image even if you took the photo at an angle. You can see a real-time preview of exactly what the resulting image is going to include on your phone screen (note the white border around the sheet of paper): 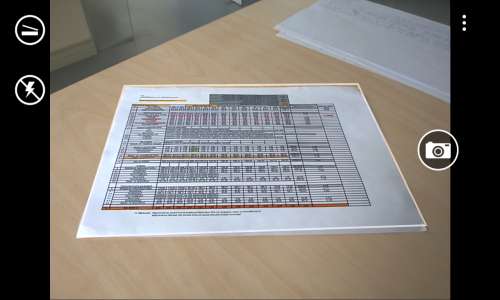 Additional fixes are applied based on the active mode:

You can switch between the modes using the icon in the top left corner. As far as I can tell, photo mode doesn't do anything special.

Finally, the resulting fixed image is saved to your OneNote notebook, to the Quick Notes section, and is also automatically scanned with OneNote's cloud-based OCR algorithms that enable you to search the image for text.

Not the answer you're looking for? Browse other questions tagged onedrive photos office-lens or ask your own question.

2
Is it possible to link the Office Hub to multiple live.com or OneDrive accounts simultaneously?
2
Can Microsoft account associated with phone 7.5 be my domain
1
Properly restore photos to Lumia 1020
2
OneNote's “Personal (Web)” notebook won't sync properly after phone reset
2
How to turn off OneDrive's “Camera roll bonus” or folder auto-generation?
3
Files stuck in OneDrive upload queue
5
Lenses won't get added to Windows 10 mobile
3
photos on phone and onedrive