What is the meaning of the globe symbol (at the end after "z") in the application menu? And why is the symbol always deactivate? 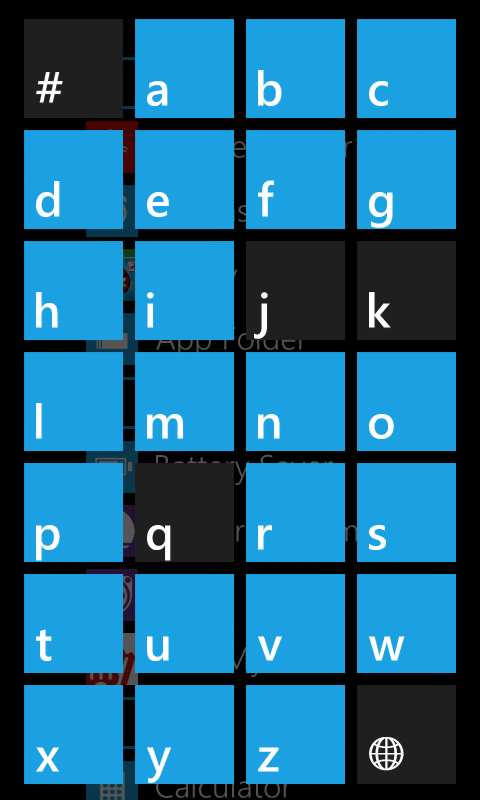 It's for those apps whose names start with characters not in your phone language's alphabet. So if your phone is set to a language using the Latin alphabet (like English), it will contain apps named with, for example, Chinese or Japanese characters. If, however, your phone uses a language with non-Latin letters, then it's apps with Latin letters that show up there.

Likewise, the # symbol at the beginning means apps whose names start with a number (e.g. 6tag or 4Blend HDR).

Both symbols are also used elsewhere in the OS, for example in the People app.

See also this article at WPCentral.

Not the answer you're looking for? Browse other questions tagged functionality or ask your own question.

3
lowering volume of the ringtone when I pick up my phone
8
What am I missing in not having a gyroscope on my phone, when using Photosynth or other apps?
7
What does the Windows Phone 7.8 update contain?
1
USSD Menus Dont Work
3
Can I still use my old WP7 device as a PDA and still purchase apps?
4
Unofficial tethering on Windows Phone
5
Is there a way to set the lock screen to never lock?
4
What do these arrows mean in the status bar?
3
My phone auto corrects things wrong