Some grammatical symbols use more than 1 character

When writing a text message, I was expecting that all (UK) standard keyboard characters would each use 1 character, but it seems that this isn't so - one exception I've found is the ¬ character, which seems to use at least 2 characters. This can be seen in the screenshot below, showing a text message (which should be 160 characters) showing that it is full after only 70 ¬ characters. I assume that the technical reason is the same as the explanations given in this twitter dev blogpost about how they count characters - but can anyone confirm this? 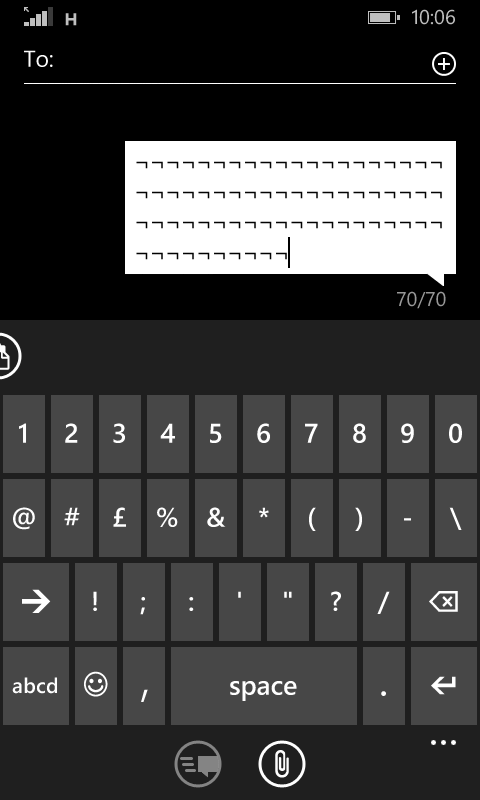 The reason is essentially the same, yes, in that it has to do with character encoding - the way human-readable characters are stored as machine-readable bits.

An SMS message has a size limit of 140 bytes, and the number of characters that can fit inside that limit depends on the encoding used.

When using language shift tables, this encoding can also support a number of other alphabets, but the number of characters is reduced slightly, as some of the 140 bytes are used to store information about which shift table exactly is used.

Another option is an 8-bit encoding, which can fit up to 140 characters per message (just like Twitter). Technical details on this seem to be sparse.

For any character not covered by the above two encodings, such as "¬", UCS-2 (now incorporated into UTF-16) has to be used. This encoding uses two bytes (16 bits) for each character, thus the total number of characters is only 70, as can be seen in your screenshot.

Crucially, even a single two-byte character causes the entire message to be encoded in UCS-2. You can see this for yourself by typing in 60 regular English characters, and then entering a special character not covered by the standard 7-bit character set. The character count will pop up, informing you that you've used up 61 of 70 characters. If you were to continue typing only English letters and standard punctuation marks or symbols, the character count wouldn't appear until you've entered 130 out of 160 characters.

Not the answer you're looking for? Browse other questions tagged 8.0 keyboard or ask your own question.

0
(1) Do not see the character counter for SMS. (2) How can I strip letters of accents?

5
What keyboard shortcuts can I use when typing on WP7?
2
How do I use a different keyboard language?
1
How to actually display calendars imported from google other than the main one?
4
Copy a single word from an sms text message
3
Some system Apps lost after hard reset
3
See more than one message on lock screen
4
Auto capitalise the character i
1
Use Bluetooth Keyboard with Windows Phone 8.1